Miss Maria Louisa “Ria” Porcher built this house in 1872. She came from Charleston, South Carolina, following her cousin Reverend William Porcher Dubose. With her she brought the three children of her deceased sister and son in law. By the time Magnolia Hall was built she had eleven motherless and Civil War-orphaned relatives in her care. She educated them and put them through college. Magnolia was so large that Miss Ria was able to house both her family and students. Mr. Robert DuBose, the doctor's brother, and his family lived with her and took over the house when she died about 1890. "No one will ever know how many boys were taken in Magnolia for half pay, or not at all, and given their chance for an education. In addition to the boys, there was a large family connection to be considered at Magnolia, and many sorrows, joys, and needs were sheltered in this home. Probably no house in Sewanee has known so many births, marriages, and deaths. How many tales its old rooms could tell of the love making and heart-break with which they are haunted." (Purple Sewanee, page 101). The fourth school for children in Sewanee, taught by Miss Louise Finley who was later the Librarian of the University, flourished here in the basement for many years. Some of her pupils were John and Henry Gass, John Puckette, Frank Hoyt Gailor, Mary, Martha and Tom Hunt.

After Mrs. DuBose's death in 1918, the University converted Magnolia into the University Dining Hall. Additions were made to the kitchen and they built a wing on the west side. Mrs. Eggleston presided over the dining hall from 1922 until her death in January 1936. "Mrs. E" was a favorite among the students and was known to handle every weather hindrance, arrival of trustees, and request of special meals with grace. Praise for her food was long, loud, and frequent. When the Navy V-12 program came to Sewanee in 1941, the University added to the building again. It continued to be the University Dining Hall until Gailor was built in 1952. Magnolia was then used for language faculty offices, a costume storeroom for the Purple Masque, and offices for student activities until it burned in 1956. 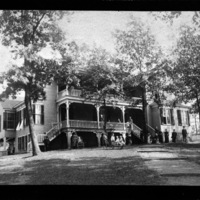