Magnolia Hall and Swayback Auditorium burned to the ground in two spectacular and simultaneous fires early Tuesday morning, May 17. Detected shortly before 2:00 a.m., the fires quickly drew hundreds of spectatois who shifted restlessly between blazes. It seems very apparent that we have arsonist in our midst, someone with really diseased mind," University e-Cbancellor Edward McCrady staat Tuesday's noon chapel service. McCrady was giving the general npus opinion. Magnolia's fire March 15, the blazes' simultaneous nature, the fact that the under-construction Guery building is to take over the funcions of each, and the thoroughness of ioth fires were factors contributing to the opinion. Officials are conducting interviews this week to determine the fires' origins. W. L. Goostree, chief inspector for the slate fire marshall, Gray Ragsdale, Jr, deputy state fire marshall, and Morris Best of the National Board of Fire Underwriters are heading the investigation. No suspects had been named Wednesday ;iflemoon. Speaking of the supposed arsonist, Dr. McCrady warned the University that, "There is no telling what conse- quences can result from this, if we don't find him." Rick Thames and Tony Veal, Gailor residents sensed smoke at 1:45, r.nd on finding the source to be Magnolia, spread word to Gailor. A group of Gailor students turned in the alarm 1:50. The fire truck was moved to e site immediately. As firefighters and students gathered, thick clouds of choking smoke billowed from the building. One fireman investigated the interior and prophetilly announced, "Well never get it this time." Five minutes after the alarm, flames emed to shoot from all parts of the old dining hall, which quickly became a roaring pyre. Salvage of books and band instruments was impossible, except for one bass clarinet and one At 2:00, student fire chief Fred McNeil received word of the Swayback fire. Upon immediate investigation he found the auditorium's blaze completely out of control. "We stayed on Mag because of the exposure problem," explained McNeil. In the early stages of the fire, ViceChancellor McCrady organized guards to prevent break-ins and looting such as occurred during the earlier Mag- Cowan fire chief C. M. Abbott, with (en men, answered a request for aid, adding his equipment and forces to the local departments'. 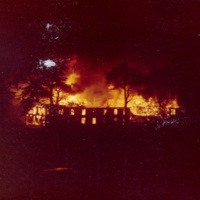