This house and the one next door, Mrs. Wyatt-Brown's, on University Avenue were built by the Smith brothers from Natchez, Mississippi in 1871. They were built just alike­ which is hard to believe when you look at them now. After Mr. Smith left, Charles S. Dwight was the next resident. He and W. A. Gibson had a dry goods store in the village for some time. The next lease holder, in 1881, was a family named Williamson.

In 1884, Mr. Preston Brooks purchased the house. Brooks, an alumnus of 1876, married a Sewanee girl, Maria Gaillard, who was brought up by Miss Maria Porcher at Magnolia. When Preston and Maria Brooks returned to Sewanee after living in South Carolina for six years, they first lived in the Selden house before buying this house, The large family of three sons and four daughters grew up there. The Brooks family owned the house for 85 years; Miss Catherine Brooks lived in the house until she died in 1969. Here Preston Brooks established his well-known village store, at first in partnership with Harlow, later with various partners, and then alone. "Uncle Pres," as he was known to all of Sewanee, died July 6, 1928. After his death his sons, Robert ("Bert") and Preston, ran the store until they died. Their widows inherited the store and operated it for a few years. They sold the business to William Hamilton in August 1963; the store is now operated by Ken Taylor. Mr. Peter Taylor owned it briefly. It was later owned by Mr. and Mrs. Harry Dodd. Mr. Dodd was the former Treasurer of the University. It is currently owned by Patrick and Susan Dean as a bed and breakfast establishment. 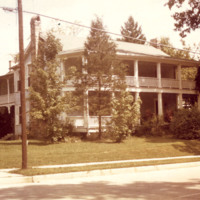