This house was built by the "Smith Brothers" from Natchez who built the Brooks' house next door at the same time. The houses were identical at first, but many additions and changes have created very different looking houses. "Widow Smith," who had two sons in the University, was the first occupant. Then the druggist Iliff Conger owned it for several years, followed by a variety of renters. It was next purchased by Frank Lautzenhauser, a University employee from Gruetli. In 1929, Mrs. Logan, the widow of Reverend Dr. Mercer Logan and mother of Mrs. Preston Brooks Jr., acquired the house.

Mrs. Little purchased the house after the death of Mrs. Logan in 1940; it was later inherited by Mrs. Little’s daughter, Mrs. Laura Wyatt-Brown. Mrs. Wyatt-Brown and her husband, the Bishop of Harrisburg and Sewanee alumni, lived here after his retirement. While living in Sewanee the couple established and aided the Independents fraternity for students who did not join Greek letter fraternities. It was said that Mrs. Wyatt-Brown was loved by all of Sewanee’s inhabitants. She regularly scheduled a cleanup of Sewanee’s cemetery and once wrote a letter inviting people to attend and work, or if too old to work, just sit and watch. The New Yorker apparently found this funny as it was commented in an issue, “Just don’t lie down, you may get buried.”

Most recently it was the home of Mr. and Mrs. Paul Engsberg. Around the time of WWI , the windows were changed from the large Victorian windows to the more colonial style that are present today. 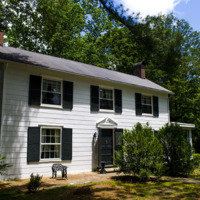