This house was on Alabama Avenue, the third house from the corner where McCrady Hall is now. This lease was taken in 1870 by a Mrs. Louisa Rowland. Apparently she didn't live here long. In 1873 Mrs. E. M. Anderson had the lease. Mrs. Anderson was related to Jefferson Davis, and his wife and daughter were frequent visitors of hers, according to Miss Queenie Washington who often stayed at Bellewood, just two doors away. In 1885 Mrs. Florence Barnwell took over the house and presided as Matron until her death in October 1922. She was a widow with two sons who both went to the University. There are fourteen Barnwells in the Alumni Directory but only two from Sewanee, Walter in 1891, and Bower in 1907. Mrs. Barnwell always wore black with a little lace cap. She was well known by everybody because she played piano for all the informal dances in Forensic “Frenzy” Hall. Her favorites were "When the leaves begin to turn ...," "The Blue Danube," and "When I was single, my pockets did jingle, I wish I were single again ..." She was remembered by the Sewanee community as having an “essential” spirit.

“Old mothers, as they pass with slow-timed steps,
Their trembling hands cling gently to youth’s strength;
Sweet mothers; as they pass, one sees again,
Old garden walks, old roses, and old loves.” –Charles S. Ross.
(Quoted by the Board of Trustees in her remembrance)

This house was pulled down during WWII to make way for Army Barracks. Mr. Douglas Vaughan said his father got some of the lumber from it, unpainted, but solid stuff still. The building has since been turned into University owned apartments and are named Barnwell Apartments after this family. 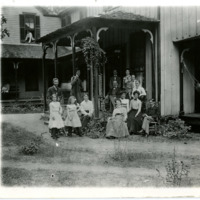