Arthur Ben Chitty, late historiographer at the University of the South, once called the Phi Delta Theta Fraternity House a "little gem of a building." Modern day owners Mishoe Brennecke and Fred Croom have re-vitalized this Victorian structure.

Its history includes it as a one-time, school and later a fraternity house then private residence. The distinction of the house being the "first house to be built by any fraterinty in the South."

"The original structure contained only two rooms and a porch for it was designed as a meeting and recreation site rather than a home for full-time occupancy." ...Care for detail is evidence in the exterior design of the house with its gingerbread shake exterior, decorated carved relief gables and porch railings, bay bow window, and quadrisided south wall with leaded glass windows in each portion."

"The present location on Alabama Avenue is the third such location for the Phi Delta Theta house. At one time it was located on the corner of "Cemetery" or Georgia Avenue" next to McGriff Alumni House or the former Phi Detla House. It then moved across the street to where duPont Library is now in 1948. Later it was moved once again up the street to its present location when John Tansey bought it 1977 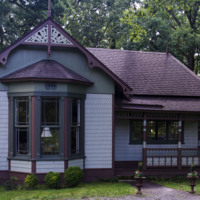