The Manly Gospel of Forestry 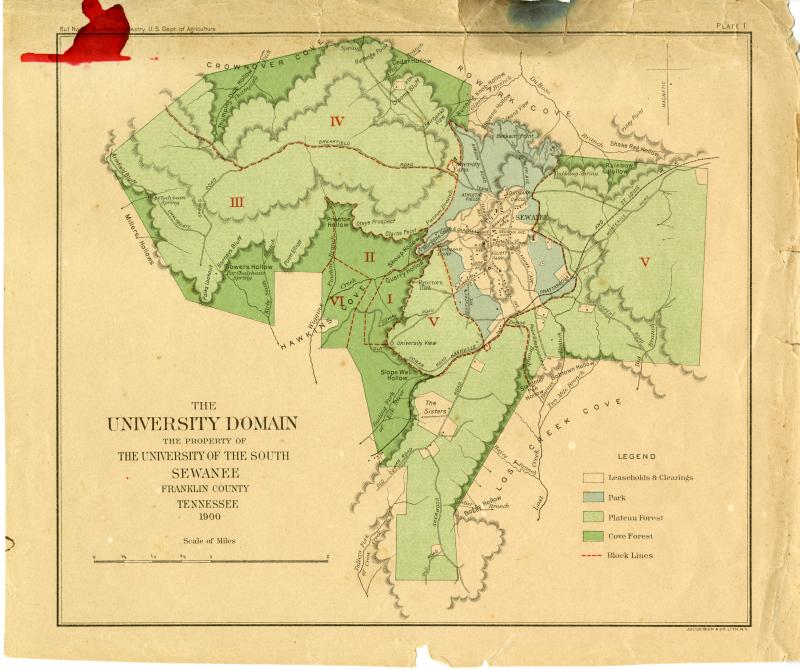 Map of the University Domain
"Conservative Lumbering in Sewanee, Tennessee" (1903)

This 1903 map is beautiful in a calculated way, Unlike the antebellum Hopkins watercolors of the Domain, the map and photographic images in "Conservative Lumbering" eschewed Romantic aesthetic evaluations for the fact-based approach of modern forestry, the practical dollars-and-cents of managing the Domain in the best interests of the University in the present and future. 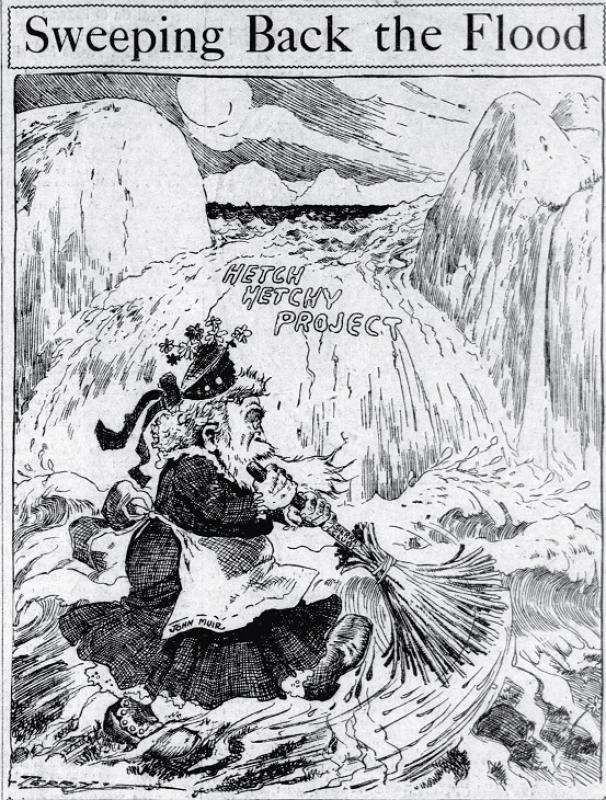 Proponents of big development projects, like the dam proposed for Yosemite’s Hetch Hetchy Valley, flashed their masculine credentials as hardheaded businessmen bringing practical benefits like jobs and prosperity. They derided the valley’s protectionist defenders – like John Muir, the early twentieth century’s leading wilderness protector – as counterfeit men. This 1909 cartoon from a San Francisco newspaper underscored the unmanly or womanish idealism of so-called “nature lovers” by putting Muir in a frock, hysterically trying to sweep back the flood of the dam project.

When B. Lawton Wiggins advanced from faculty to Vice Chancellor’s office in 1893, the Purple praised him as “the man best calculated to throw off the clogs of old customs, which have so seriously retarded the material progress of the University in the past, and to infuse new life in the place.” Wiggins’s arrival coincided with the fading of the University’s Civil War generation of leaders, which enabled him to promote a more national and less sectional institutional identity and to modernize its curriculum. Wiggins’s embrace of rough virile sports was one way he modified the customary expectations of Sewanee men. Another was his conservationist approach to the University’s Domain, particularly its forests. Wiggins brought Sewanee’s vast acreage under the scientific and – according to its proponents – vigorously masculine management of modern forestry.

At the turn of the twentieth century most Americans regarded the supporters of protecting public lands from development, conserving natural resources, or beautifying industry-blighted landscapes as gender deviates: in the vocabulary of the time, “nature lovers” or “short-haired women and long-haired men.” A major reason they ridiculed such advocacy as “sissy” or “sentimental” was that women had dominated the early movements to protect wilderness regions. Even men with impeccable and manly scientific credentials had to frame their conservationist or protectionist actions or advice in consciously hypermasculine terms lest they be discredited as weak or effeminate.

These gender concerns affected Wiggins’s efforts during this period to gain control over and manage the woodland resources of the 10,000-acre Domain and to commence formal academic instruction in forestry science. The Domain’s forests and lands were among the University’s most valuable resources. However, by the 1890s they had been depleted. In some cases, the University itself recklessly harvested stone for its own structures or for sale. In others, the sizeable local population on or off the mountain treated the University’s lands as a commons where they could cut trees for firewood to use or sell. Frequent fires had devastated the Domain, and freely grazing livestock roamed and ate at will. Strapped for funds in 1896, the University considered a trifling offer of $2,000 to clear-cut what trees were still standing.

Vice Chancellor Wiggins convinced the Board of Trustees to reject that offer and to seek instead the guidance of the nation’s leading scientific forester, Gifford Pinchot. His visit to Sewanee in 1898 was a landmark event in the University’s history. It led to a formal “scientific” study of the Domain landscape and a report, “Conservative Lumbering at Sewanee, Tennessee” (1903), which outlined a practical plan for rationally protecting, harvesting, and sustaining the resources on the Plateau. It has influenced University policies ever since. Wiggins pushed hard to incorporate the discipline at Sewanee and adopted Pinchot’s characterization of forestry as a thoroughly masculine discipline that prepared young men to lead useful and practical lives. 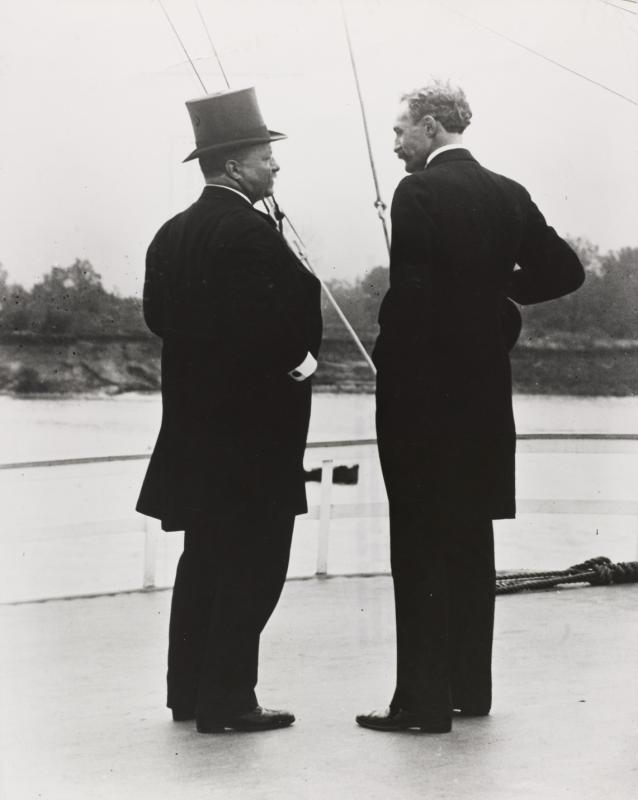 A Man With Practical Problems to Handle

Vice Chancellor Wiggins cultivated his personal connection to Theodore Roosevelt in part through their mutual friend, Gifford Pinchot. Roosevelt promoted a vigorous federal government refereeing the competition for control of the nation’s natural resources to protect the public interest. In a 1905 speech he defined the vital national interest in the scientific management of America’s forest resources in terms of three distinct varieties of manhood. The first was represented by the avaricious and unmanly capitalist: “the man who skins the land.” The second was the effete wilderness protector who values the forests as pretty scenery, or “bric-a-brac.” The third – and the one Roosevelt endorsed – was the virile scientific forester: “the man who develops the country.”

Wiggins similarly advocated a strong federal role in managing the nation’s forests. He also believed that universities needed to furnish the nation with academically trained foresters. His speech to the American Forest Congress in 1905 praised the practicality and realism of scientific forestry and declared Sewanee a convert to and “zealous missionary” of “the gospel of forestry.” Wiggins died in 1909. The University did not begin forestry instruction until 1923, but its use of a forestry management plan made Sewanee the first of America’s universities to do so. Here Wiggins explains the kind of man a university course in forestry would make.

There is no profession I know of that requires wider knowledge than does forestry.... Since he deals scientifically with the soil and a product of it, he must be much of a geologist, botanist, zoologist, and chemist. The harvesting and manufacture of his crop calls for no mean engineering skill and knowledge. The managing of his property is likely to call for legal knowledge. And so on through many other essentials in his education, which only a real university can give him. Another and most important reason why forestry should be a university course ... is that the forester is above all a man with practical problems to handle–a man who must come in contact with men. So he needs the democratizing influence of university life, the broadening of his point of view from association with men from everywhere and with different aims in life. Without this breadth of view how could foresters properly handle the many problems discussed before this Congress? It will take men far more catholic than those who academically settle affairs on the basis of knowledge acquired in their back yards to give a square deal to all the interests concerned in the creation of forest reserve and in the granting of timber and grazing permits on them .... Why should not our universities offer courses which will fit men for all, instead of a few, professions? I know there are dangers to be apprehended, and that it will require the utmost care to avoid the Scylla and Charybdis of a narrow utilitarianism and the pursuit of art and science as ends in themselves; but of the many advantages, not the least will be the introduction of a vitalizing and democratizing element into the student community which will cause our universities to come forth from their cloistered seclusion into a closer touch with the activities of life.…

Conservative Lumbering is a textbook example of the conservationist principles and approach that Pinchot brought to the Bureau of Forestry: a practical plan not to preserve the Domain as a natural sanctuary, but to wisely use and replenish the University’s forest reserves to generate revenue for the present and to renew resources for future generations. In making this argument, it incorporates Roosevelt’s gendered distinctions between the selfish (unmanly) spoiler of the forest and the enlightened (manly) “forest expert.”
On the mountain true manhood (or the lack of it) corresponded to class divisions. The report advised the University to erect a virtual fence between its own forested Domain and the local mountain people, who were accustomed to using the land and forests as they needed or saw fit, which is to say selfishly and unscientifically. The report’s characterization of the local people’s practices as evils – the lack of self-restraint and respect for private property, abuse of privileges, laziness – demeaned the manhood of the mountain men to consolidate its case for scientific forestry in the gendered terms of specialized and intelligent management.

The [University’s] forest had been misused for many years and was steadily declining in value, but the financial condition of the University prevented any expenditure on its improvement and demanded that it be made to yield immediate returns. In spite of these disadvantages a plan of management was devised and applied which has been profitable and has left the forest in good condition after lumbering.…
Grazing, burning, and careless cutting have wrought great mischief in the plateau forest, intensified by the fact that the valuable trees are those which suffer most. Cattle show a preference for the leaves of Tulip-tree, White Oak, Chestnut Oak, and Chestnut; hogs prefer the acorns from the more valuable oaks, because this fruit is the sweetest, and fire does most harm to the sensitive Tulip-tree and to Pignut. Lumbering has worked in the same direction, for it has removed only the most valuable trees …
Most fires at Sewanee occur in the early spring and late fall. They are usually set by railroad locomotives, farmers, nut-gatherers, or visitors to the woods.... Farmers burn off the leaves and underbrush to improve the pasturage; nut-gatherers set the leaves afire in the fall to expose the nuts and crack the husks…
Under the lax forest management of the University excessive abuse of the forest was formerly tolerated. Tenants once cut timber without restraint, not only from their own lease holds, but from unleased land. The permission of the University was not always asked. The result was the trees were cut for a bit of timber needed at the moment and the unused portion left in the woods. Trees felled for rails were discarded if they did not split readily.…
Lumbering at Sewanee has never been followed as a regular business. Men have worked at it only when an easier and better-paying job was not to be hand. It has not, therefore, received the benefit of the specialization and intelligent management which come with long practice.…

← Freshmen Initiated Into Sewanee Life and Spirit
Measuring Up: Modernizing the Sewanee Man →
The Manly Gospel of Forestry