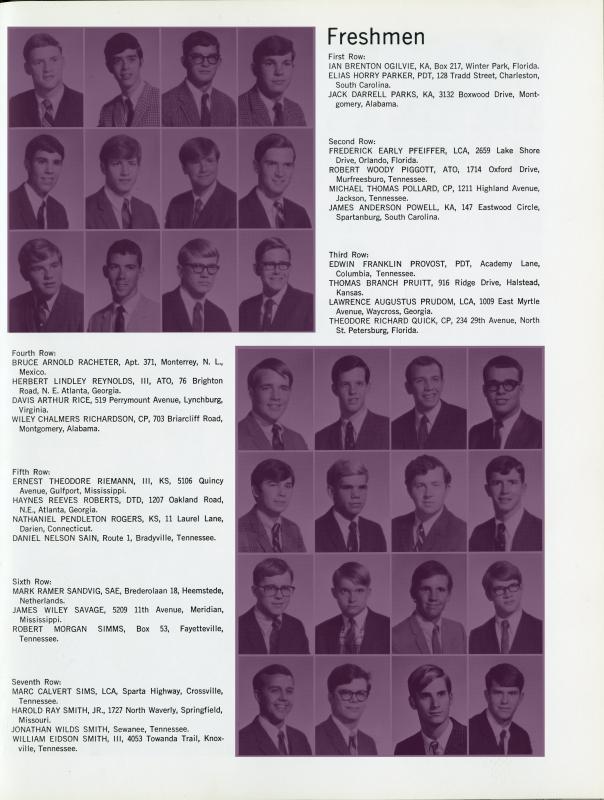 Since the 1890s, various University and administrations and governing boards had entertained and decisively rejected an array of schemes for admitting women - as graduate students, as students of their own mountaintop college, as the wives of Sewanee Men or daughters of Sewanee faculty. When a parallel women's college was proposed around 1900, a writer for the Daily Purple reported that "students, almost to a man, are hearty in their condemnation" of the plan because it would "destroy the esprit de corps ...prized by the students." This attitude changed little over the next sixty years. The matriculation of women as full-time undergraduate students in the College of Arts and Science equal in all ways to Sewanee Men, was simply out of the question. As late as 1968 nothing would have changed if the Vice Chancellor, Edward McCrady was solely responsible. 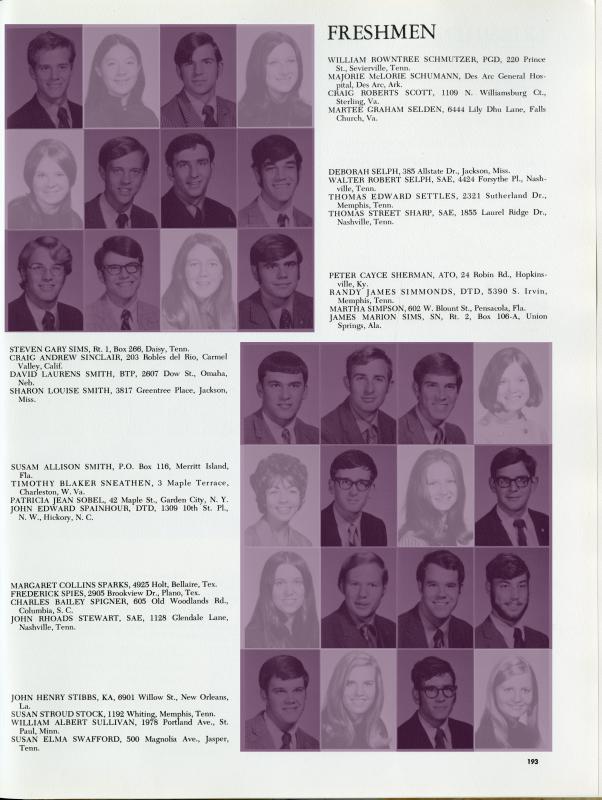 However, after 1965, a variety of local and national factors converged such that McCrady had to yield to necessity and enact the most far-reaching change in the University's century-long history. Nationally, single-sex education was rapidly disappearing for idealistic and practical reasons. At Sewanee, where applications for admission dropped precipitously after 1965, faculty and growing numbers of trustees pushed the case for admitting women. Some 200 students assembled in 1968 to request the once unimaginable. The Board of Trustees later passed a motion to admit "not more than 100 qualified women students" for the 1969-1970 academic year. Vice-Chancellor McCrady grumbled that the action came "without the recommendation of the administration or the regents" but no matter. Including transfer students, 103 women enrolled at Sewanee in 1969.

The alumni Sewanee News announced the changes in a positive fashion, but in a manner that underscored the attractive delights of the new Sewanee woman. These images in many ways were consistent with representations of “the Sewanee Girl” or campus “Beauties” in publications since the early twentieth century. Sewanee Men had always needed actual as well as idealized women, who served as the irreplaceable cultivators of Sewanee manhood. Sewanee Men had always imagined the University as “her,” and heartily sung “our Glorious Mother ever be” in Newton Middleton’s “Alma Mater.” The roles of matrons and other female pillars of the University social scene who taught the guiding principles of Sewanee gentlemen functioned outside the classroom and chapel were never marginal. The role of women as inculcators of right behavior and civility followed the long-standing American belief in women’s innate moral superiority and purpose to instruct the young. Matrons of the University, acting as dormitory mothers, were supposed to foster high-minded conversation and good manners at dining hall tables and have a “civilizing effect” on the boys living in their dorms. 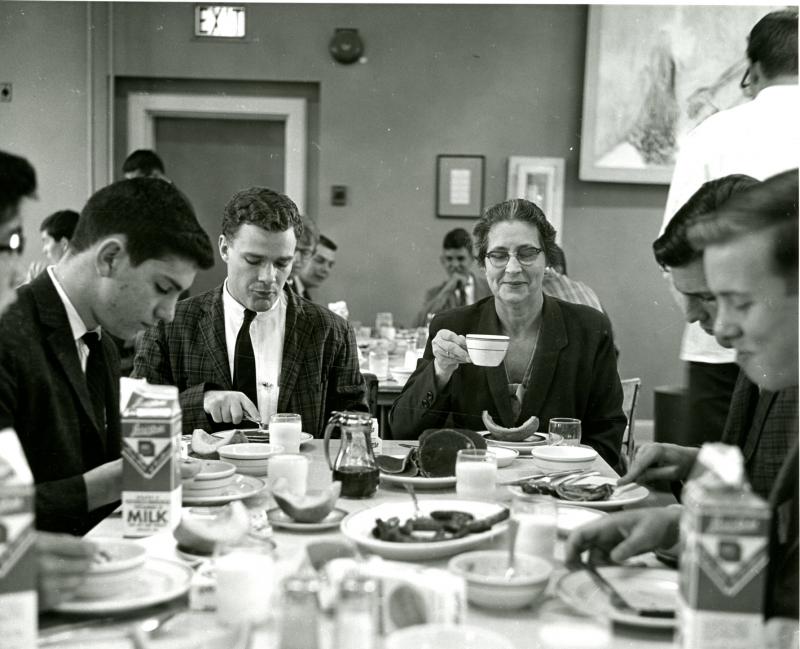 Like the earlier decision to abandon whiteness as a precondition of membership, the admission of women in 1969 both challenged and preserved the presumptions of Sewanee manhood. Without women students, the College may well have sunk into oblivion, and taken the Sewanee Man with it. But the persistent area of tension and concern since 1969 has been the degree to which women’s presence and influence as full-fledged students would alter Sewanee’s long man-centered focus and identity. If anything, Sewanee women have strengthened the University, but their present did disrupt long-standing expectations of Sewanee life. Four of these areas are addressed in this section of the exhibit: academics, social life, athletics, and housing. 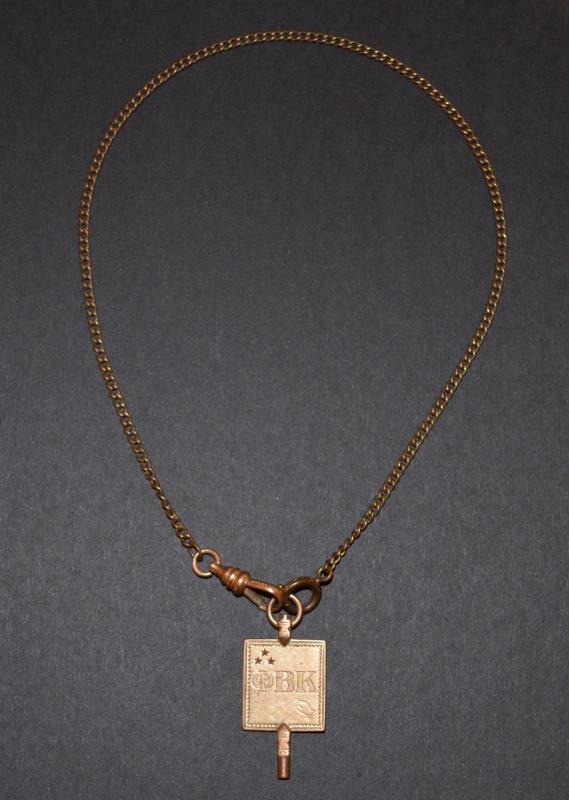 The Phi Beta Kappa Society, the oldest honor society for the liberal arts and sciences, began inducting women shortly after their arrival on the Mountain.

The admission of women at schools across the U.S., including Sewanee, dramatically affected – or even improved – the academic environments. Sewanee faculty member Robert Degen writes in a March 1994 letter that “the intellectual level of the College rose as highly qualified women were admitted thereby avoiding the acceptance of marginal male candidates. Having women present had a salutary effect on male class participation for now there was often the incentive of making a good impression on classmates of the opposite sex.” Not only were some men prevented from attending the University due to its new admission standards, but some Sewanee Men suddenly found themselves in competition they had previously not encountered.

Male professors operated at both ends of the spectrum. On the one hand, alumnae recall several professors actively engaging in sexist classroom behavior: giving precedence to “pretty” women, refusing to give an A grade, or by making it hard for a woman to participate in class. Some instructors ignored women entirely. On the other hand, once the initial strangeness of having the sexes in an ‘equal’ environment wore off, some professors seemed more than happy to bestow on women their due equal recognition and were even active in helping women win positions of leadership. 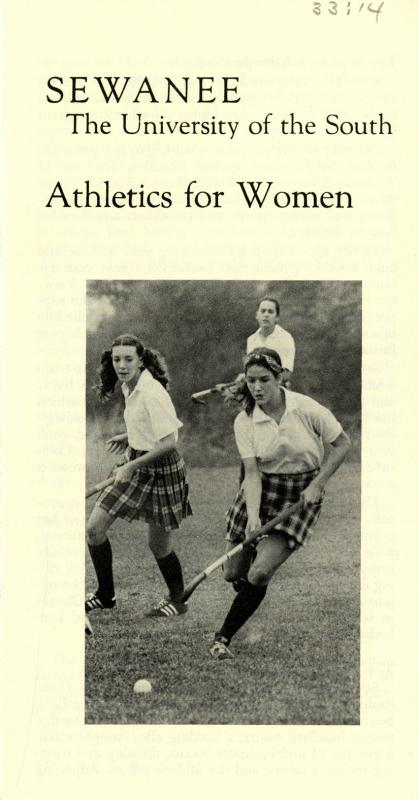 Upon their arrival at Sewanee, women found an institution ill prepared to accommodate their expectations for athletic competition. Initial fears existed on campus that their addition would disrupt the sporting pursuits of male students by forcing them to share training spaces and fields, by diminishing the pool and quality of potential male athletes, and by diverting funds to support new programs for women. Facilities were limited, and women initially were allowed to enroll only in co-ed physical education courses in tennis, golf, karate, bowling, and lifesaving. Team sports were limited to club and intramural formats that competed with men’s teams only as a novelty.

The advent of the 1975 Title IX athletic provisions at Sewanee came amidst claims that “Women students can get cooperation from the athletic department here without waving the belligerent banner of Title IX,” explained Betsy Cox, Women’s Sports Editor of The Sewanee Purple in an April 10, 1975 editorial. The actual conditions of women’s sports contradicted this assertion: only $3,600 of the $175,000 allocated to athletics in 1975 was earmarked for their activities. In ensuing years, opportunities for women’s athletics expanded as the gender balance in the overall student body became more equal. By 1981 women accounted for 43 percent of the student population. The fears of widespread damage from integrating women into the sports programs were overstated. However, change was slow, as symbolized in the continued use of the feminized team names of Tigerettes and Lady Tigers, which were not officially prohibited in university media until 2011. 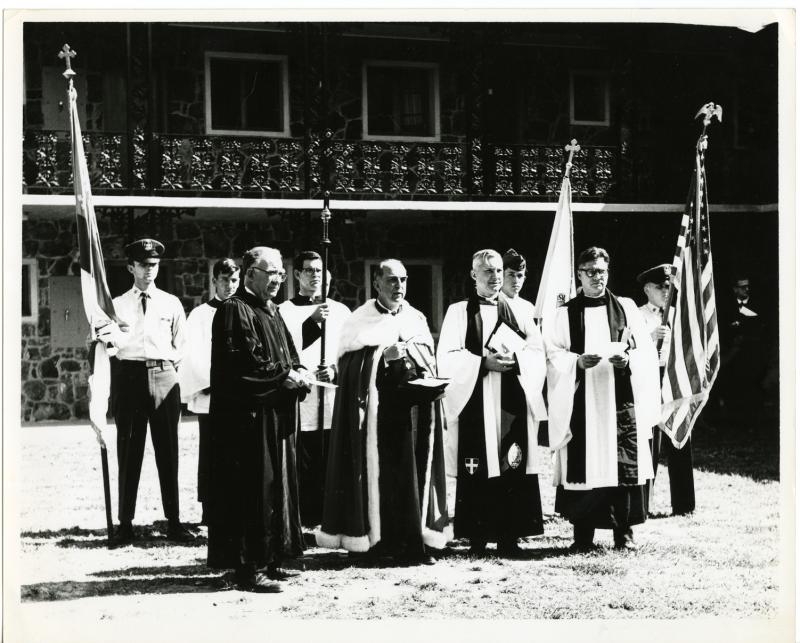 Throughout the United States, the decision to become a coeducational institution often hinged on the availability of housing. Whether they were merely making excuses or identifying a real obstacle, opponents of coeducation routinely cited the shortage of women’s dormitories as the reason not to admit women. Despite the fact that many male students at Sewanee welcomed the admission of women, there were others who felt the change inflicted an injustice on the existing male students. The Sewanee Purple printed a male student’s “Letter to the Editor” on February 2, 1970, in which he announces, “[t]he girls have invaded our sanctuary” and are “a devastating factor in our community...”

The administration assigned Benedict Hall to the newly admitted women but this meant evicting the male students, who were offered replacement housing in a newly completed dormitory. Members of the Delegate Assembly and the Order of the Gownsmen, two student governing entities composed of men and women, collaborated to draft and later voted to approve a set of “Open Dorms” policies for dormitory visitation, which still limited room visits to specific hours. The deans charged with evaluation of the policy vetoed it immediately. Students, they explained, “were not ready, capable, or mature enough to handle the situations open dorms would create.” As a result, the many male students who had endorsed the Board of Trustees’ requirement to admit women and accepted responsibility for governance of coeducational facilities and organizations encountered the continuing paternalistic authority of the University’s administration. 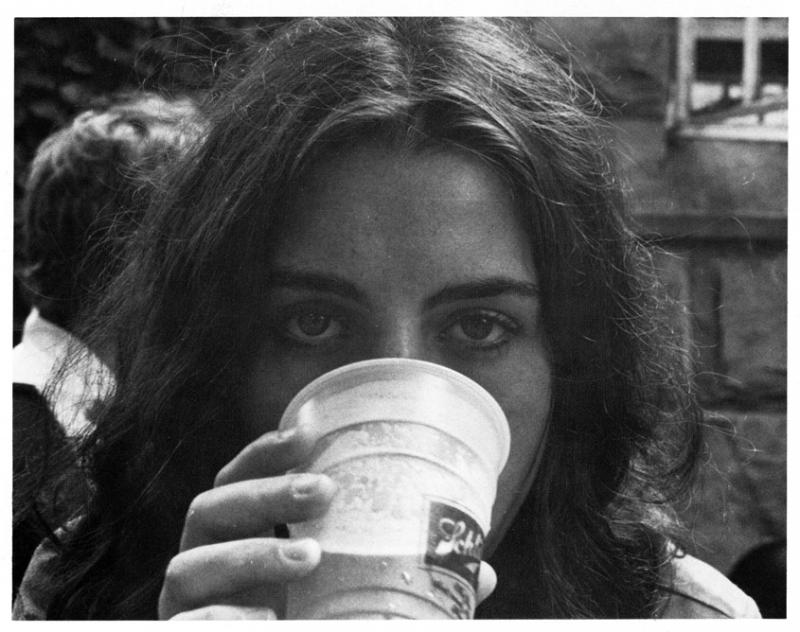 The first wave of coeds often were marginalized at campus social functions, for which male students continued to rely for their dates on “lovelies” brought from other college campuses. Campus graffiti sometimes stated the preferences of Sewanee Men for women who met the “traditional role… rated according to her submissiveness to masculine whims, her admiration of ‘conspicuous consumption,’ and of course her radiant appearance.” (Sewanee Graffiti, No. 3, 1974). Appraising women in this way was not peculiar to Sewanee; at other American college campuses women were judged and sometimes rated on their feminine attractiveness. 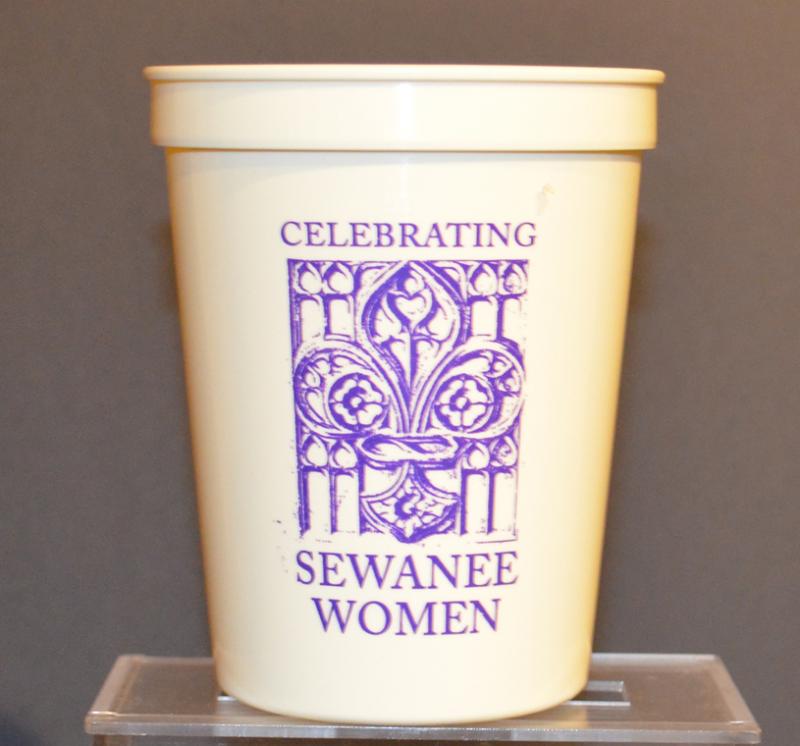 Frequently regarded as competitors in the classroom, Sewanee women also challenged the traditional and fraternal revelries on the mountain. More female students meant fewer male students overall, which meant a smaller pool from which to choose members for various men’s clubs and ultimately less money for their operation. However, by the mid-1970s, Sewanee women had begun creating their own counterparts to men’s fraternities, drinking and honor societies, and other clubs, which effectively challenged men’s domination of the social life of college students as a whole. 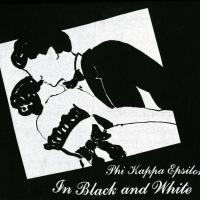 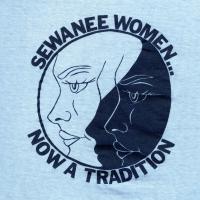 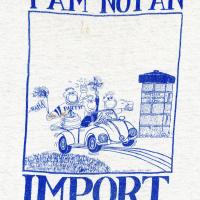 Changes in the Sewanee social landscape were reflected in the shirts designed to commemorate campus events.

← Schoolboys, Firebrands, and Miss Clara: Integration at the Sewanee Inn
"Women are... trouble"