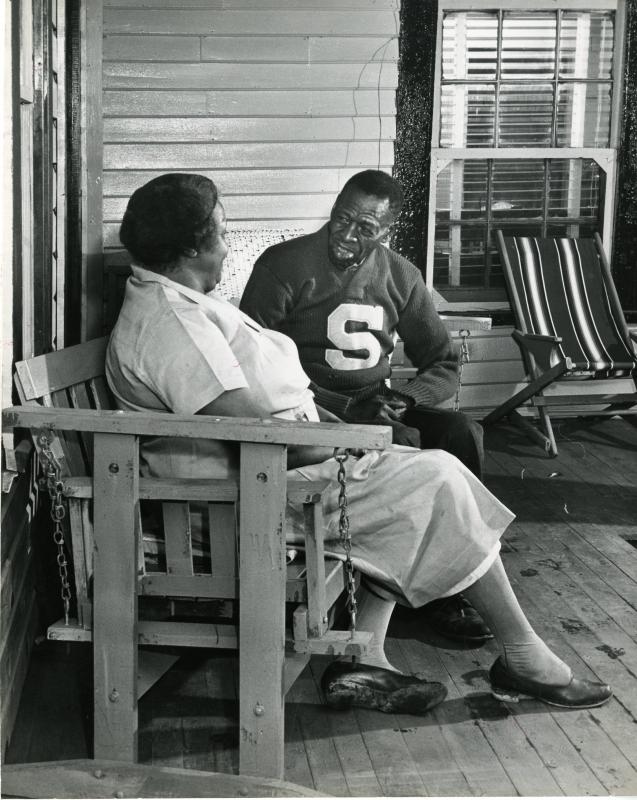 Willie Sims and Molly Sims, on the porch of their Sewanee home, ca. 1947

Willie Sims was an actual person, although the fragmentary evidence preserved in the historical record of the University leaves only the faintest outlines of his life beyond the boundaries of the real and symbolic labor he performed as the football team’s trainer. Reliable accounts of his voice – notations that we can be confident represented his unguarded thoughts or desires – are nearly impossible to locate. We have records that he traveled with the football teams to their faraway games, but where did he stay when in Birmingham, New Orleans, and Nashville? What did he do in those cities when his energy, identity, and desires were not constrained by his role as the team’s trainer and rubber? What, for that matter, was his life in Sewanee when he was not the football team’s “faithful trainer”? That “Willie Sims” – who was not solely “Willie Six” – eluded the record-keepers, but it is important, out of respect for him, to imagine that he had a realm of meaning and an identity unconfined by being “Six.”
Today we take for granted the official data keeping that surrounds our identities. In the decades after slavery class and race frequently determined whether a life in the rural South entered the official record. Poor and black, Willie Sims irregularly attracted the attention of record-keepers. Did he spell his name “Sims” or “Simms”? His marriage license indicates one way, his death certificate another.
Another sign of his lifelong poverty, limited education, and status as a social inferior is the uncertainty surrounding his birth. According to his grave marker, he entered the world in 1886 and died at the age of 63; his death certificate says he was 69 when he died. The Chattanooga Times reported he was 62. Although we cannot be certain of his birth date, his death resulted in the official recording of other important information otherwise hard to find, including the names of his father and mother and the causes of his death.

The one “official” biography (included in the program for the “Willie Six Day” football game) has him moving to Sewanee in 1901 and living with a cousin in the “Negro section” of town that whites called “Happy Hollow” – black residents themselves did not use that name. According to this account, he began working in 1907 on the crew building the new All Saints’ Chapel. The following year the football coach arranged for him to work afternoons as “trainer” with the athletic teams. For four years he worked on the chapel in the morning and at the gymnasium in the afternoon, as follows: “report to the gym after lunch, fire furnaces, clean up, lay out and repair uniforms and equipment, rub and bandage players, hang uniforms to dry, bank the furnace, lock up, and then, without supper, start on a round of calls at the dormitories to massage the more seriously injured players.” In 1911 he shifted to fulltime as trainer and worked continuously for the next thirty-six years.

The photographer for Life, who came to Sewanee to record “Willie Six Day” in 1947, left the only images in the University record of his domestic life. Preserved in the archive but never published, they include the only image of Mollie Sims, his wife. Focusing on the honoree, the photograph catches only a fraction of her face. We gather additional information about who she was from a bill she submitted to the athletic department – the year is unknown – for three months of sewing work for the football team. The bill bears her signature (are there one or two M’s in her name?). A record of her husband’s signature has yet to be found.

Official public records give a different and, in some ways, more reliable account of Willie Sims’s life. A Franklin County marriage license shows “Willie Simms and Mollie Trimble” wedded the day after Christmas 1907. The 1920 U.S. census shows the Simses with four children. The 1940 census – the first to include information about income – tells us that he reported earnings of $360 as a team “rubber”; an assistant coach at Sewanee that year made $1,800, the professor of public speaking William MacKellar $2,880. 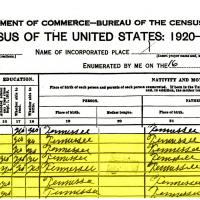 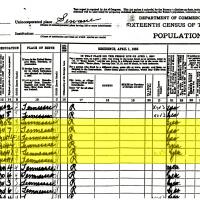 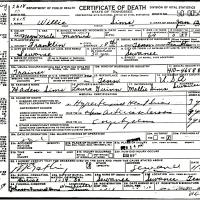