"With a love, passing the love of woman for the land of the sun and the slave" 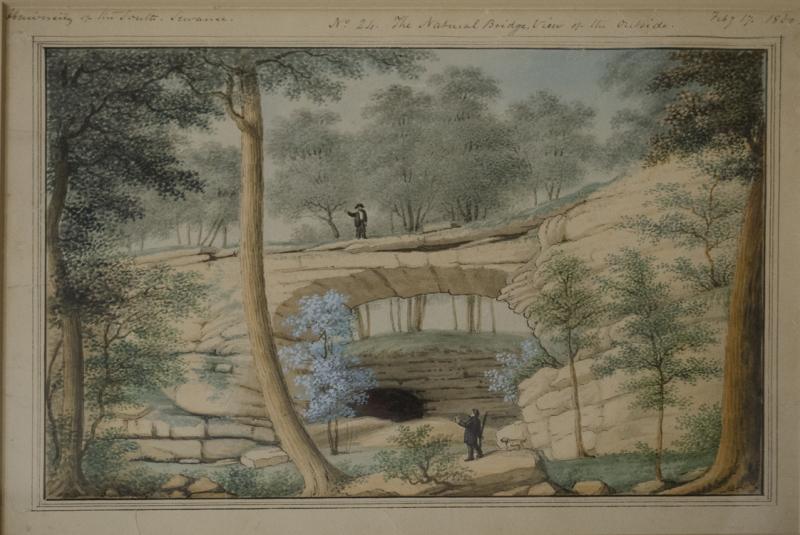 No. 24, The Natural Bridge, View of the Outside
The Rt. Rev. John Henry Hopkins
Watercolor, February, 1860

The Founders' Choice of the Sewanee Location

After much and often acrimonious debate among competing interests, the board appointed to found the Southern University chose a site on the western rim of the Cumberland Plateau known locally as Sewanee. To explain its reasoning, the board issued a signed statement, which exhaustively described the advantages of the selected site, underscoring the natural beauty and abundance of the area and its lofty perch above the lowlands, where diseases like cholera and malaria threatened. The statement underscored how the University, its academic operations, and its environment would integrate seamlessly with the needs and expectations of the slave society's master class and vindicate the southern way of life. 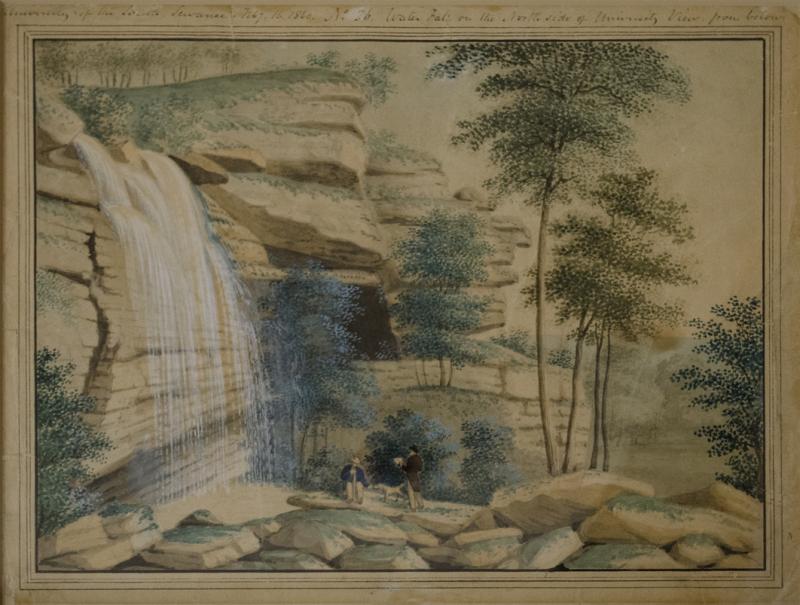 No. 26, View of the Domain, Water Fall on the North side of University View from below
The Rt. Rev. John Henry Hopkins
Watercolor, February, 1860 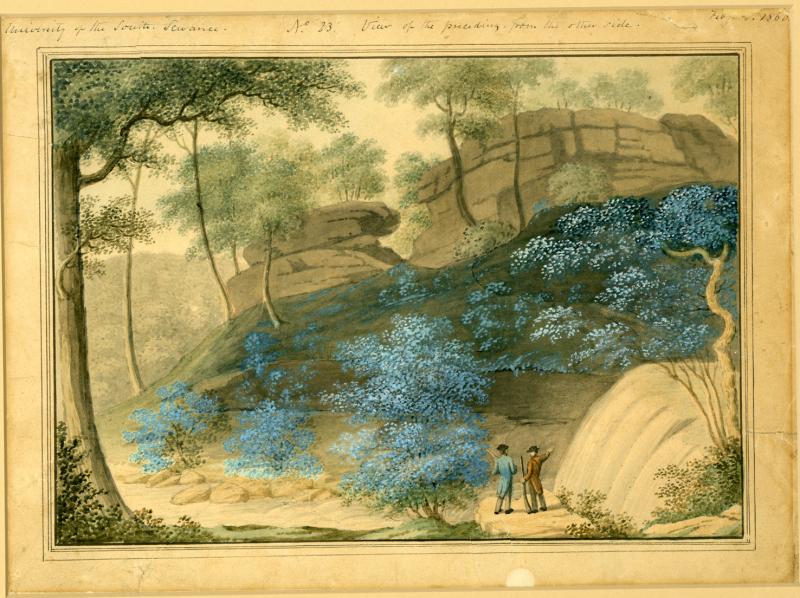 No. 23, View of the preceding from the other side
The Rt. Rev. John Henry Hopkins
Watercolor, February, 1860

Address of the Board of Trustees of the University of the South, to the Southern Dioceses, in Reference to Its Choice of the Site for the University (Savannah: George H. Nichols, Printer, 1858)

Our citizens have … made the summer months their period of travelling, either for pleasure or business. During these hot months their plantations and even their city homes are deserted and they are scattered all the world over, from our local Springs to Saratoga, Newport, Paris, Rome, and Naples. At this season it is inconvenient for them to have their sons returned upon their hands. They do not wish to introduce them, at that immature period of life, to the dissipated society of watering places … For the South, the proper vacation of an University is the winter; that season when our planters and merchants can receive the returning student to his home, and revive within him that holy domestic feeling which may have decayed amid the scholastic isolation of a College; when he can engage in the sports which make him a true Southern man, hunting, shooting, riding; when he can mingle freely with the slaves who are in his future to be placed under his management and control. That a literary institution may give the student these precious months, it must be placed where the climate will permit him to apply himself during the hot months of summer, where intellectual labor will not be a burden, where cool nights and mornings will restore the energies which have flagged under close application…

The Cumberland Plateau seems to have been formed by god for the benefit and blessing of the valley of the Mississippi and the cotton growing regions of the Southern States … The time is not distant when this whole plateau will be covered over with villas, and cottages, and watering places, and will teem with the most refined society of the South and West. This will be the place of meeting … and cement the strong bond of mutual interest with the yet stronger ones of friendship and love …

Such are the reasons which have induced the Board of Trustees to adhere to their choice of Sewanee as the fittest site for the University … They felt that they had volunteered to perform for the South a work which was to bless it for ages to come, which was to mould its morals and its learning, which was to raise its trailing banner from the dust and plant it upon an equal height with those of other civilized people. If they failed, [we] … should continue to be dependents in this as in everything else. We should continue to import Teachers, Clergyman, Professors, and Literary men from other lands. We should return nothing to the common stock of literature and science, and should be aliens from the commonwealth of letters. We should leave our institutions with the stigma resting upon them of degrading instead of elevating our social condition. All these consequences were before us when we made our choice, and in full view of them, with a holy pride for the elevation of our homes, with a becoming zeal for the moral culture of our people, with a love, passing the love of woman, for the land of the sun and the slave, we were willing to stake our judgments upon the selection and leave it to time to vindicate its soundness….