Greenwoods: William Alexander Percy and the Arcadia of Sewanee 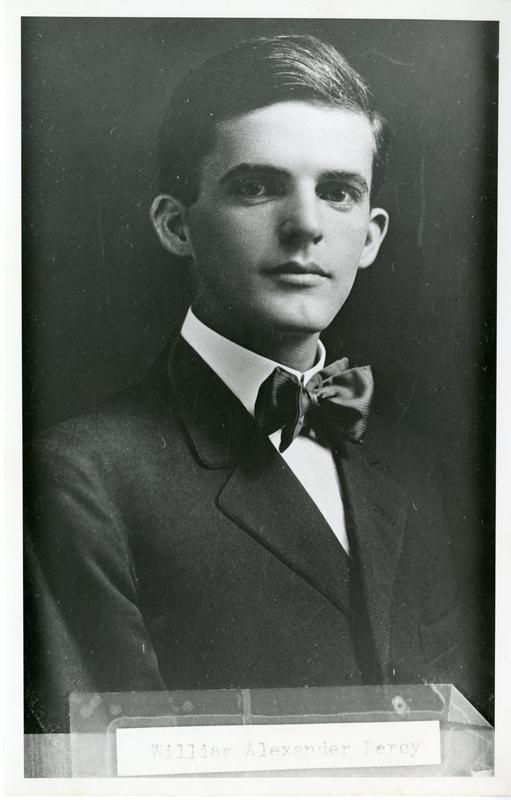 The career and writings of William Alexander Percy (1885-1942), who graduated from the College in 1904, hint at the multifaceted power and elasticity of the ideal of Sewanee Manhood. In many respects Percy was the prototype of the pedigreed Sewanee Man. The Percy family, who owned thousands of cotton-filled acres on the Mississippi Delta, embodied the “Old South” aristocracy. The University graduated many of the family’s patriarchs, including Percy’s father, LeRoy, a U.S. senator and frequent hunting companion of Theodore Roosevelt. The young Will Percy’s post-Sewanee career – Harvard-educated Mississippi lawyer, decorated veteran of the Great War, hero of the relief effort during the Great Mississippi Flood – met his father’s and his University’s high expectations of elite white masculinity.
But there was another dimension to Percy’s manhood, which can be glimpsed in his writings. Percy’s prose and poetry described an alternative, even, for its time, radical masculine ideal that flourished on the Sewanee mountain. This masculinity was not defined by rough sports, martial rigor, or Christian morality. It found its highest expression in the love between men and their spiritual devotion to art and beauty, and is described in Percy’s lyrical chapter about Sewanee in his 1941 memoir, Lanterns on the Levee. Writing of Sewanee and its men, Percy only once mentions football and does not dwell on the University as a bastion of Old Southern life. Instead, he recalls a place where young men and their teachers shared a warmly enclosed space surrounded by nature and defined by intimate and loving friendship. 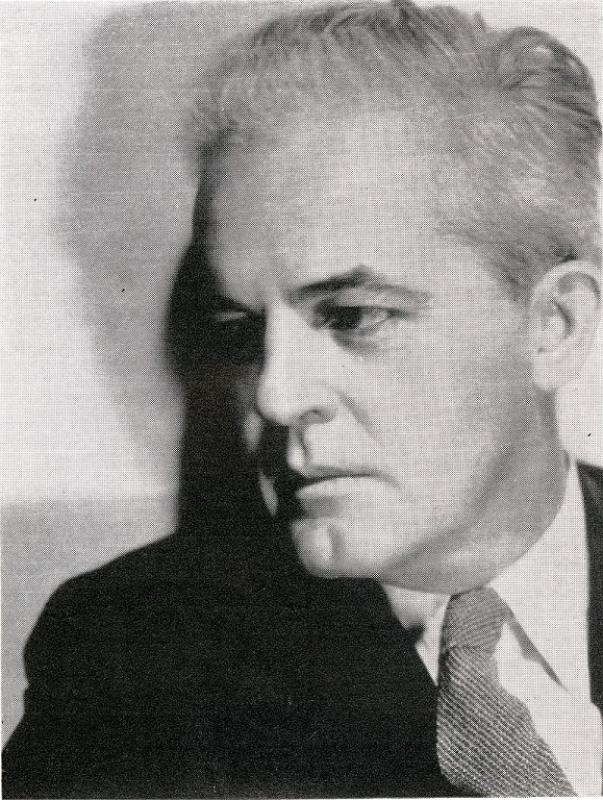 Generations of University students have cherished – and only partially understood Percy’s affectionate portrait of Sewanee as a timeless and unchanging “place to be hopelessly sentimental about and to unfit one for anything except the good life.” Sewanee, he said, was “Arcadia,” the mythic vision from Greek antiquity of an unspoiled pastoral setting of innocence and beauty where men dwell together in friendship and harmony with nature. Sewanee, when Percy was a student, was saturated with Hellenism – the veneration of Greek antiquity.
To the uninitiated, Percy was being merely poetic here or, as many have thought, indulging in sentimental nostalgia for a lost world of innocence. In actuality, “Arcadia” was a key term in an elaborate system of coded vocabulary, iconography, and allusions. When they spoke or wrote about the glories of Greece – its fauns and satyrs, Pan, Dionysus, Centaurs – educated and cosmopolitan homosexuals like Percy were referring to real or imagined places where it was safe for men to love other men openly and without shame. They used this hidden language not only to communicate safely with each other but also to celebrate the beauty and naturalness of same-sex love. For Percy, the “greenwoods” of Arcadia/Sewanee were such a place. With his friends and some of his teachers he discovered the love of men, experienced his sexual awakening, and later made a home here, where his sexuality made him no less a man. 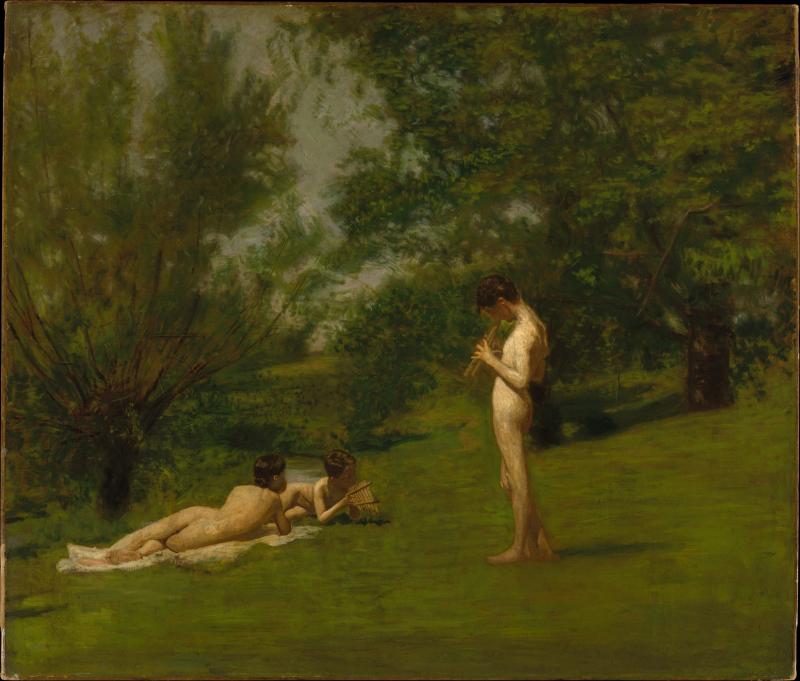 Arcadia
Thomas Eakins, 1883.
Courtesy of The Metropolitan Museum of Art

“Myself one of these mountain dwellers for four tears, I have observed them, off and on, for twenty more. It is to be marveled at that they never changes. They may not be quite the same faces or the precise bodies you met a few years back, but the alterations are irrelevant -- a brown eye instead of a blue one, a nose set a little more to the left.  The lining is the same. Neither from experience nor observation can I quite say what they learn in their Arcadia, though they gad about freely with books and pads. Indeed, many of them attempt to assume a studious air by wearing Oxford Black Gowns. In this they are not wholly successful, for, no matter how new, the gowns always manage to be torn and insist on hanging from the supple shoulder with something of a Dionysian abandon. Further, even the most bookish are given to pursuing their studies out under the trees.”
“The Arcadians learn here -- and that is why I am having such difficulty telling you these things -- the imponderables. Ears slightly more pointed and tawny-furred, a bit of leafiness somewhere in the eyes, a manner vaguely Apriline -- such attributes though unmistakable are not to be described. When the Arcadians are fools, as they some-times are, you do not deplore their stupidity, and when they are brilliant you do not resent their intellectuality. The reason is, their manners -- the kind not learned or instilled but happening, the core being sweet-- are far realer than their qualities. Socrates and Jesus and St. Francis and Sir Philip Sydney and Lovelace and Stevenson had charm; the Arcadians are of that lineage”

Confidant in Love:
The Hellenism of William Porcher DuBose

One of the major new directions of pedagogy in late-nineteenth-century America was enshrined at Sewanee in the 1890s. It was oriented around the cultivation of an ideal manhood for the modern world, and persists in the curriculum and life of the University today. Hellenism, as an educational philosophy and pedagogy, originated at mid-nineteenth-century Oxford. It expressed an influential anti-modern critique of the commercial and industrial world that devalued art, literature, and beauty. The ancient Greeks served as models for education’s contemporary reform agenda: to cultivate creative and artistic souls who would lead modern society away from the meaningless devotion to commerce and industry. The Oxonian version of Hellenism was influential at Sewanee in two ways. First was the focus on the classics, especially Greek history, literature, and philosophy. Equally important was Hellenism’s pederastic model of teaching, which prescribed the ideal relationship between teacher and student – an older man and a younger man – as an intimate, loving friendship built on a common devotion to learning and appreciation of beauty.
The influence of Oxonian Hellenism at Sewanee is evident in the autobiographical memories of the Rev. William Porcher DuBose, the influential theologian and classicist who was the first chaplain, a beloved teacher and supporter of the Oxonian gown tradition. The writer William Alexander Percy recalled DuBose as “a tiny silver saint … more conversant with the tongues of angels than of men,” and whose talk of Aristotle’s Ethics left his students “feeling luminous.” DuBose describes his educational duty to civilize an unruly and individualistic generation of young men through his personal influence.

“I was in fact more one of them than one merely over them. I was finding and making myself in and with and through and by, as well as upon, them. I claimed nothing, exacted nothing, imposed nothing of or for myself, and they both took more from me and gave me more than I ever asked or deserved. In addition to all this, the isolated location of Sewanee, the high quality of its limited community, the social unity, warmth, and charm of the place and the life, conduced in a singular way to the cultivation of personal relations and ties, as well between students and professors as among all others. So from those early days I became in many instances the intimate personal friend of many of my students, their confidant in love, their counsellor in difficulty or trouble, their companion, so far as presence and sympathy could go, in amusement or play. Of course, with age and with engrossing care and occupations, the outward exercise and expression of all these ties grew less, but I am grateful to feel that to the last I am trusted and treated as one whose heart is the same.”

← Measuring Up: Modernizing the Sewanee Man
"With a love, passing the love of woman for the land of the sun and the slave" →
Greenwoods: William Alexander Percy and the Arcadia of Sewanee